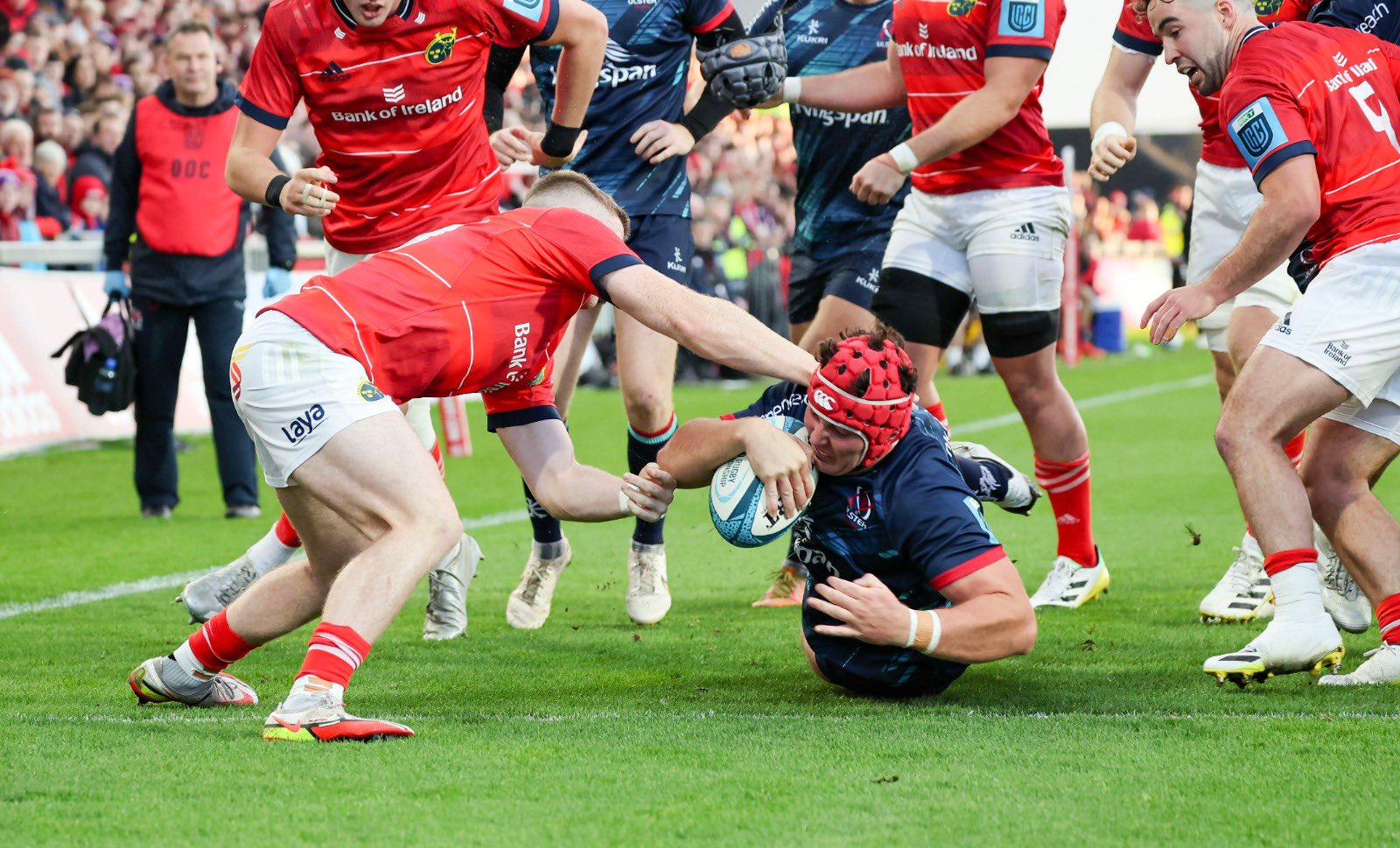 Munster’s streak of victories at Thomond Park against interprovincial rivals was ended on Saturday evening in a narrow 15-14 defeat in the BKT United Rugby Championship.

Graham Rowntree’s men failed to get out of first gear until the second half began but their comeback came so close to being remembered for a positive result.

Ulster came out of the blocks with the throttle slammed to the floor, moving the ball up the field at an unrelenting pace, albeit in a more direct manner than usual.

It only took four minutes for the team from Belfast to score their first try – Jordi Murphy backed up his return to the starting XV on short notice when he finished off a lineout maul move.

Ulster’s lineout is the best league according to the URC’s very own stat centre and this was solidified throughout the first half in which they used it as a primary source of attack inside the Munster 22.

This specific maul move would be the bane of the Red Army’s existence for the first half as Emerging Ireland hooker Tom Stewart laid it on a platter for his forwards to get towards the try line.

It paid off a second time in under 10 minutes when Stewart himself grounded the ball after creating yet another dominant move.

However, not before Jack Crowley had opened the scoring for the home side.

Crowley had a much better night from the tee than his opposite as Nathan Doak missed every kicking opportunity available to him.

Lock Edwin Edogbo was the standout for Munster in the first half with his work at the breakdown potentially try-saving on several occasions.

A back may have been their first-half hero if it were not for an ineffective 40 minutes with the ball in hand.

Fullback Mike Haley showed off his offloading ability twice in the same period of play but the Red Army could put nothing on the scoreboard to complement it.

To make matters worse, Ulster number 13 James Hume crossed the line in the red after his opposite man Malakai Fekitoa saw yellow for a shoulder-to-head tackle.

But things changed in the second half despite the introduction of the British and Irish Lion Rory Sutherland in the visiting pack.

A botched Ulster lineout four minutes into the half foreshadowed the turning of the tables and Crowley brought the sides within a score in nine minutes following this moment.

Fekitoa returned improved and the renewed parity of personnel and Munster’s changes early in the second half steered them on course for another famous Thomond Park night.

Simon Zebo played a wonderful pass to Shane Daly for the team’s only try of the game and their dogged defence, embodied by Edogbo in the first half, was now functioning properly.

Munster kept Ulster scoreless in the second half, holding them under the 18.6 average total they conceded in the previous games.

However, it was not enough as they could not manufacture another scoring opportunity and were left to rue a missed conversion when they conceded a game-ending turnover.

Munster’s fifth loss of the season will leave a sour note in the mouths of fans but the side showed once again that they are capable of better things.

The upcoming league break may be beneficial for a side close to figuring things out, but not close enough to stop the slide right now.