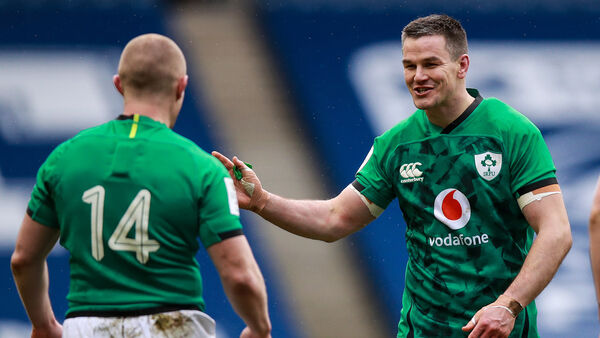 Ireland secured a victory against Scotland in a scrappy encounter in Murrayfield as a late Johnny Sexton penalty proved the difference.

Although Ireland have now secured two victories in a row, they were far from impressive and saw a 14 point lead reeled in before Johnny Sexton’s 76th minute penalty was enough for victory.

Ireland face England next week as they aim to end the Championship on a high although they will need an improved performance after Eddie Jones’ side downed the French yesterday.

Ireland started the brighter of the two sides as a James Lowe surge brought Ireland in to the Scottish ’22. After a series of carries by the Irish pack, Russell was penalised for not rolling away as his opposite number kicked the straightforward penalty.

Andy Farrell’s side continued to retain possession and a Sexton Garryowen was tapped back on the Irish side by Robbie Henshaw.

With Ireland in their opponent’s ’22 a Sexton Crossfield kick caused mayhem with Stuart Hogg knocking the ball forward and Henshaw was the quickest to react as he grabbed Ireland’s first try.

Scotland began to grow in to the game and sought to utilise the full width of the pitch at every available opportunity. Russell almost burst through the Irish defence but James Lowe managed to dislodge the ball from the fly half’s hands.

Russell did kick a penalty after Jamison Gibson Park was penalised for holding on the ground while the Scottish playmaker helped his side move in front in the 27th minute.

CJ Stander earned a turnover in the Irish half but Stuart Hogg blocked down Garry Ringrose’s attempted clearance.

Russell kicked the loose ball straight in to Lowe but the Irish winger spilled possession and the loose ball fell in to the hands of the grateful Russell, who added the extras.

Scotland’s lineout endured a torrid afternoon and they turned over possession from the set piece before coughing up a penalty which Sexton converted.

Russell missed a penalty and his mistake was punished when his opposite number notched another three points to help Ireland lead 14-10 at half time.

With both sides struggling to hold on to possession at the start of the second period, Stander earned Ireland a penalty at the breakdown deep in Scottish territory.

Sexton kicked the penalty to the corner and after the Scots illegally hauled the attacking maul to the floor, Ireland went again with Tadhg Beirne muscling his way over after forceful carries from Stander and Will Connors.

Sexton notched the conversion and also kicked a penalty after Jamie Ritchie failed to roll away the breakdown.

Ireland found themselves 14 points clear but their joy was short lived as Scotland halved their arrears.

Stuart Hogg found replacement Huw Jones on the wing as the substitute breezed past Lowe before jotting down. Hogg took over kicking duties and nailed the difficult kick to reduce Scotland’s deficit to a single score.

The second half was filled with poor decision making and basic handling errors with Lowe guilty of placing a pass in to touch as Ireland began to build up ahead of steam.

Replacement Irish hooker Ronan Kelleher was guilty of a crooked throw at the lineout with Scotland earning a free kick.

Van Der Merwe broke through the Irish midfield with Andy Farrell’s side infringing at the breakdown which helped Scotland move within five metres of the Irish line.

Gregor Townsend’s charges threatened the Irish line but despite some frantic defending including a terrific tackle by Connors on Van Der Merwe, Hamish Watson managed to score the try with Hogg’s conversion levelling the game.

Scotland were architects of their own downfall as Sexton’s late penalty earned Ireland a nervy victory.