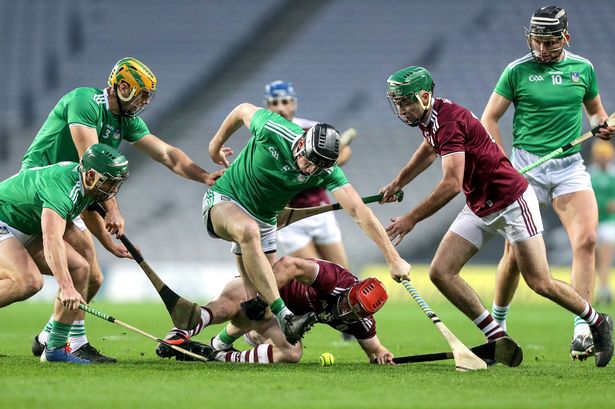 Limerick withstood a late Galway fightback as they reached their second All-Ireland final in three years.

Despite not being at their free-flowing best, John Kiely’s men were able to do enough to book a December 13th final date with Waterford in a repeat of the Munster final.

Here, we pick the talking points from a tense All-Ireland semi-final.

On a day when Limerick’s full-forward line were well shackled, John Kiely’s side still found a way to notch 27 points and book an All-Ireland final spot.

The half-forward line of Tom Morrissey, Cian Lynch and Gearoid Hegarty struck 12 points between them as their long-range shooting was excellent throughout.

The trio also worked tirelessly throughout almost 80 minutes of action.

Morrissey struck the first two scores of the game when his team were struggling in the opening quarter while Lynch provided some moments of magic throughout to set up attacks for his side.

Hegarty showcased his threat in attack and defence as he continues to stake a claim for Player of the Year.

The trio will need to produce another top-drawer display if Limerick are to lift Liam McCarthy once more.

Limerick have avoided conceding a goal in a Munster final and an All-Ireland semi-final in the space of three weeks.

With Mike Casey and Richie English out injured for this campaign, Dan Morrissey and Barry Nash have provided excellent cover for the duo.

Morrissey was excellent under the high ball while Nash coped admirably with Conor Whelan and Brian Concannon.

The latter enjoyed a quiet second half with Limerick’s full-back line on top.

Seán Finn stood up to the challenge and it seems the Bruff man never has a bad game as he remained composed when in possession and did everything required.

Limerick have not found the net in their last two games but when your defence dominates the way they did, it enables Limerick to play with freedom.

Galway proved stubborn opponents and even managed to level the game in injury time despite Joe Canning going off injured after an unfortunate collision with Joseph Cooney.

Limerick showed greater composure down the home stretch with Tom Morrissey knocking over a fine score after a mistake by Galway goalkeeper Eanna Murphy.

These are the small margins that can decide games with Limerick content to keep knocking over long-distance scores.

Upon reflection, Shane O’Neill will be content with Galway’s progress this year after a poor start to the league but he will be disappointed that his side failed to create a goal opportunity in the second half.

Plenty for Limerick to improve upon

The Treaty men deserve great credit for gaining the victory, but Limerick will have areas to work on ahead of the All-Ireland final.

Graeme Mulcahy was called ashore early in the second half while Aaron Gillane was shackled by Daithi Burke.

After a fine opening half, Seamus Flanagan faded as the full-forward line struggled to maintain the high standards set earlier in the Championship.

Limerick’s discipline was an issue with Joe Canning helping Galway to keep tabs on their opponents by converting frees.

John Kiely’s men enjoy scoring from distance but they may need to rattle the back of the net if they are to overcome Waterford in the All-Ireland final.

Hurling has been exceptional this year

With much debate over the decision to continue playing GAA during level 5 restrictions, the quality of hurling on show throughout this condensed Championship campaign has been exceptional.

The football championships have provided shock results, but the hurling championship has been filled with quality and drama throughout.

Waterford highlighted the unpredictability of the year by coming from eight points down to seal a deserved victory against Kilkenny in the other All-Ireland semi-final.

There has been plenty of negativity throughout 2020 and although GAA cannot change that, it has certainly given fans and players alike an opportunity to forget the hardship faced by many this year.