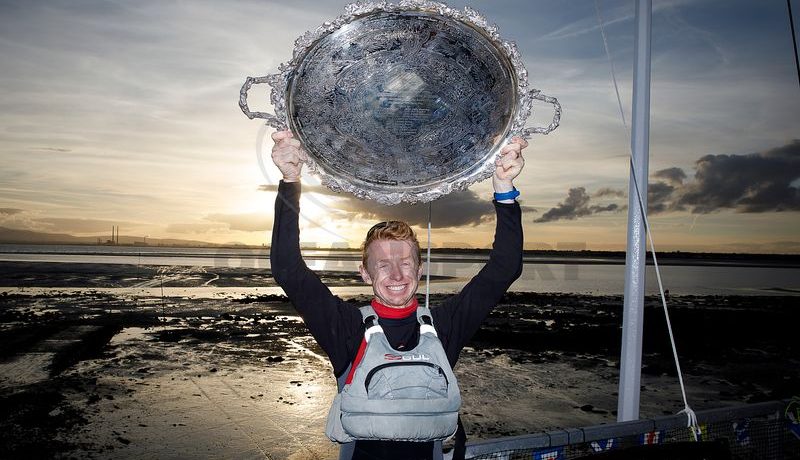 This article was the winning submission for the inaugural Irish Sailing Future Journalists Prize. The entrants were invited to attend the 75th Irish Sailing Champions Cup’ on Saturday, October 8th and write a piece on their experience at the event. This feature can also be seen on the Irish Sailing website, as well as in the latest Irish Sailing newsletter.

Melanie Morris’ victory alongside Olympian, defending champion and sailing partner of 23 years Ger Owens was the icing on the cake of a remarkable day for women at the 75th Irish Sailing Champions’ Cup on Saturday at the Sutton Dinghy Club in Dublin.

The competition sees the top sailors in the country from all the different classes go up against each other in one neutral sailing class decided in a vote each year – the GP14 class was chosen for this year’s tournament.

Owens added his name to the silver salver for the third time, but it was the first time he did so with Morris after 23 years of sailing together.

The pair from Royal St George Yacht Club in Dun Laoghaire excelled throughout the day, which came to the surprise of very few as the GP14 is the class they train in.

They showed off such training by expertly executing tight turns, and dazzling all kinds of spectators, from those watching up close on RIBs (rigid inflatable boats) to the seals hanging out near the shore.

Morris was over the moon after conquering the Champions’ Cup alongside Owens and could not hide her joy.

“I am totally delighted because Ger and I have sailed together for so long,” she said. It’s the first Champions’ Cup that I’ve ever had the real option of doing…it was a brilliant day’s sailing so I would have enjoyed it no matter what but to win was just perfect. It was a really great day”

Morris was one of seven female crew that took part in this year’s proceedings while four women were at the helm of some of the GP14s that went up against the winning duo.

The nomination criteria for the competition were updated to allow more women to compete while the rebranding to the Champions’ Cup was done in the name of inclusivity.

The winning crew explained that the GP14 class lent itself to such a diverse field of competitors, noting that these boats were a good choice to showcase that.

The success of helmswomen Niamh Henry and Jane Kearney underlined this statement.

Recent university graduate Henry went toe-to-toe with the veteran presences in the field, including four Olympians.

Kearney crossed the finish line in second, beating out the current GP14 national champion Shane McCarthy, who traded blows with the winning boat until the very end.

The Royal North of Ireland Yacht Club sailor, who sailed with her husband Ross, mentioned that seeing another woman at the helm in the final only motivated her further.

The influence of women on this year’s event went beyond the shoreline, stretching into the clubhouse from which spectators had gathered with their binoculars.

Sutton Dinghy Club Commodore Ciara Ó Tiarnaigh kept herself busy during the day, handing out soup to those who were watching the action and making sure everything was in order.

Commodore Ó Tiarnaigh is following in her parents’ footsteps by being the head of the club – her father Riocard held the role three times before his passing and her mother Muriel was the first female Commodore at Sutton in 2004.

The incumbent club head noted that it was “a huge honour to be asked to host [the Champions’ Cup] as a club” and even more so because it fell during her time as the head of it.

“It’s great to have so many females involved in this particular event because it is the ‘Champion of Champions, you know what I mean? So, it just shows that we’re up there with the best of them.”

The now three-time Champion of Champions Ger Owens was on a similar wavelength after he finished covering up the winning boat.

Owens was really impressed with the number of women on the water on the day and added that it was a very good day for the class with such strong representation.

He namedropped Jane Kearney, commending her performance in the competition but most of his praise went to his teammate ‘Mel’ whom he was overjoyed to share the victory with.

The three-time Olympic athlete for Ireland exclaimed that winning with his sailing partner of over two decades was “the jewel on the crown.”

After the day of sailing at Sutton, that description from Owens and the image of himself and Morris hoisting the salver aloft triumphantly made for a perfect closing chapter to a brilliant day of sailing where women were at the centre of it all.