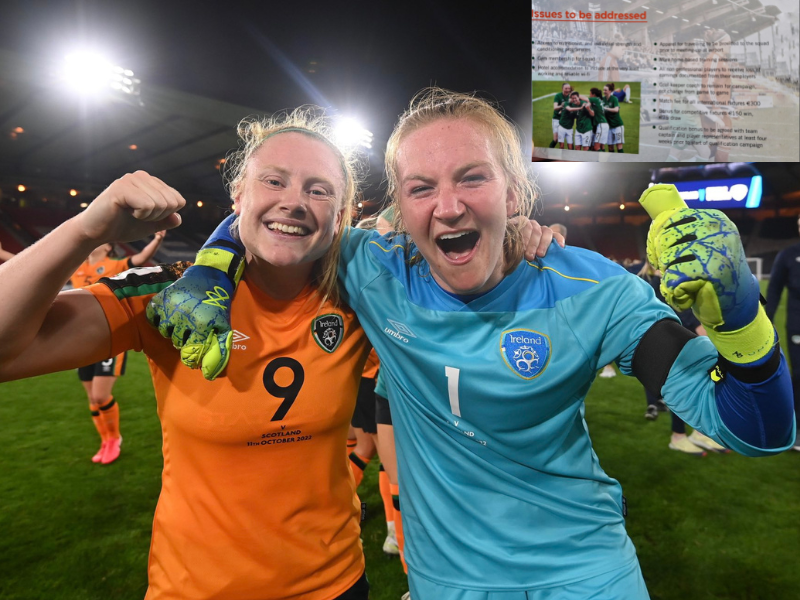 When it mattered most, when the chips were down with the eyes of the nation on them, Vera Pauw’s side made history by becoming the first Republic of Ireland team to qualify for the Women’s World Cup, thanks to a dramatic 1-0 triumph over Scotland.

In the 72nd minute, Denise O’Sullivan picked out Amber Barrett with a peach of a pass to set up the inch-perfect finish that elicited joy from Hampden Park to living rooms across Ireland.

As part of her goal celebration, the 26-year-old dropped to her knees, pointing at the black armband worn in memory of the victims of the recent Creeslough tragedy in her native Donegal.

Ireland were not the favourites going into the all-important tie, but Vera Pauw’s tactical masterplan worked to shut out the hosts.

Speaking to RTÉ in an emotional interview after the game, the manager expressed her delight.

“We were so ready. The way they executed it [the game plan] was not beautiful and we will need to work a lot, but the game plan was successful. I can’t believe it.”

The win means that ‘The Girls in Green’ will take part in their first-ever major tournament at the ninth Women’s World Cup in Australia and New Zealand next summer, but their upward curve would not be possible if it weren’t for what the team did in 2017.

Some of the current team were part of the crop of players who took a stand against the mistreatment of the women’s national team.

A culmination of events and sub-par standards led to then-captain Emma Byrne leading fourteen international players to a press conference in green t-shirts with the word ‘respect’ emblazoned across the front.

Players demanded better conditions and more equality to their male counterparts after they were made to feel like ‘fifth class citizens’ by the Football Association of Ireland (FAI). The team were left to battle against other nations while they also had to fight their own.

Byrne made a statement of intent to media that day that paved the way for what the country is now celebrating.

With other countries excelling, there was frustration at Ireland’s lack of support for the team and its efforts both on the pitch and off it.

The press conference was a last resort of sorts – there were previous attempts made to secure access to a nutritionist, a gym, their own kit and a €300 match fee, but they fell on deaf ears.

Áine O’Gorman, who started on the right of midfield against Scotland to clinch World Cup qualification, highlighted the sexism the side was facing during the conference.

She noted that the team were looking for a basic level of respect- something they felt they were denied.

When the FAI heard of the planned press conference, the players were told of how it could be of harm to their careers if they were to go ahead with it.

Following the public shaming of the conditions and the suggestion that the team may consider striking action and choose not to fulfil their upcoming fixture in 2017, the FAI released a statement.

“The ultimatum by the players concerned comes in spite of repeated invitations from the FAI to the Players to discuss clear and tangible financial offers for the payment and compensation of members of the squad. Repeated efforts by the Association have been made in a bid to encourage the players to row back from their unprecedented ultimatum.

As a result of the team revolt, the issues mentioned were resolved and the team could focus on their football.

It took a dark, embarrassing day for the FAI to properly invest in the women’s team, but you can imagine how the association feels about that day right now.