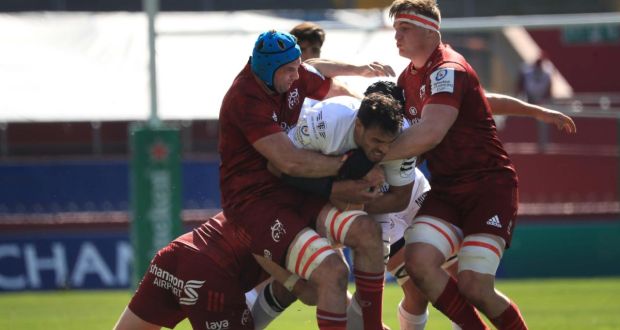 Toulouse earned a 40-33 win against Munster as two late Antoine Dupont tries proved the difference between the sides.

Despite Munster’s best efforts, Toulouse possessed the greater attacking threat as they came from 26-23 down to ensure the home side could not enjoy another special result at Thomond Park.

Two tries in the final 10 minutes from French scrum half Antoine Dupont helped Toulouse to victory despite a Gavin Coombes try in the final play of the game.

This defeat caps a disappointing week for Munster after their Pro14 final defeat to Leinster last Saturday.

Toulouse started the quicker of the two sides with fly half Romain Ntamack carving open Munster’s rearguard after a poor boxkick by Conor Murray allowed Maxime Medard to gather possession.

Munster infringed three times in their own ’22 as Wayne Barnes lost patience and sin binned centre Chris Farrell with Ntamack kicking the penalty.

Ntamack missed a penalty on the 10th minute with Munster struggling the protect their carriers at the breakdown, leading to penalties and turnovers.

However, Damien De Allende jinked by a couple of tacklers before powering his way over the gain line with Toulouse wandering offside. Carbery slotted the kick as Farrell returned after his sin bin.

Toulouse and Ntamack proved to be menacing in attack as the out half caught a Murray box kick and glided past Carbery before Murray was penalised for holding at the breakdown with the scrum half fortunate not to be sent to the bin.

Ntamack restored Toulouse’s lead from the tee but for all their attacking threat they only lead by three points.

They were made to pay for this when two Farrell carries put Munster on the front foot before World Cup winner De Allende broke through the Toulouse defence, drew Cheslin Kolbe in before passing to Keith Earls, who crossed the whitewash.

Munster had a huge overlap out to the right but De Allende stepped off his right in midfield to catch the Toulouse defence out and race up to the five-metre line.

Johann Van Graan’s men looked to have spurned the chance for a moment when Toulouse got bodies back to make a couple of despairing tackles but once Murray spread play to the wing, Earls had the simplest of finishes. Carbery missed the difficult conversion as Munster led by seven.

Toulouse’s response was immediate as Julien Marchand earned a penalty at the breakdown with Ntamack reducing the French side’s deficit to four points.

In an action packed first half Jack O’Donoghue stole a Toulouse ’22 before Tadhg Beirne was forced off injured with a rib injury.

A CJ Stander turnover on half way helped Munster earn a penalty in the Toulouse ’22. The French side then conceded the penalty with Carbery adding the three points to help Munster lead by 16-9 at half time.

Toulouse started the second half as they did the first with the French pack troubling the Munster defence before an Ntamack chip was caught by Matthis Lebel with the winger crossing the try line. Ntamack added the extras to level the game.

A Niall Scannell turnover helped Munster stop a Toulouse attack before a Murray snipe at the breakdown brought Munster within five metres of their opponent’s line with a penalty advantage.

From the penalty Munster opted to tap and go with Gavin Coombes crossing the line with the TMO confirming there was no knock on in the build up.

The pendulum swung Toulouse’s way as they struck back in devastating fashion.

Unsurprisingly Ntamack was at the heart of the action as a clever chip was knocked on by Kolbe but Earls was deemed to have made contact with the South African winger in the air.

Toulouse were awarded the penalty as they opted to kick to the corner and after some strong carries by the pack, hooker Julien Marchand powered over with Ntamack adding the extras to level the game.

Munster brought play up to the Toulouse ’22 after a Mike Haley kick led Toulouse scrum half Antoine Dupont to miscue his kick for touch.

Johann Van Graan’s charges thought they breached the French side’s rearguard again when Earls flung a pass through his legs to Conway who crossed the whitewash but Wayne Barnes says the pass was forward.

Munster were playing with a penalty advantage as substitute JJ Hanrahan kicked the easy three points.

In this heavyweight contest, Toulouse landed a decisive blow. A fantastic Lebel side step saw him evade Hanrahan’s challenge with the winger offloading to Dupont who scored Toulouse’s third try.

Ntamack added the conversion to help Toulouse lead by four with 10 minutes remaining.

In the 74th minute Niall Cronin conceded a penalty on half way but Ntamack’s kick sailed wide of the posts.

Dupont crossed again with the TMO ruling Aldegheri did not knock on in the build up. Munster battled until the end but a Gavin Coombes try in the 80th minute was only a consolation as Munster’s European run came to an end.