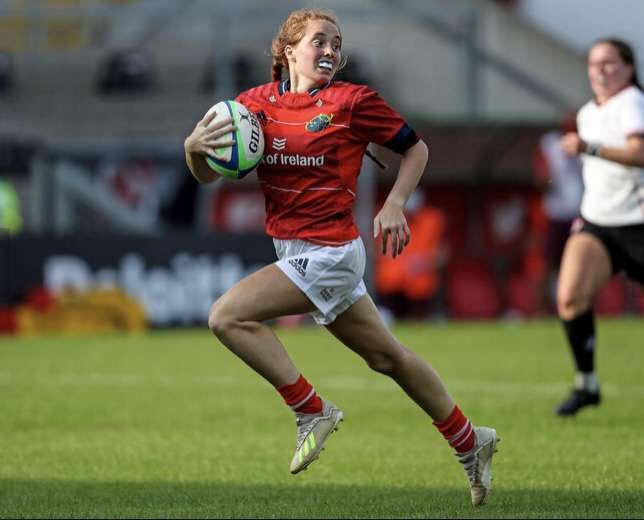 At only 22 years of age, Muirne Wall has already made a great name for herself in the rugby scene.

From her humble beginnings playing tag rugby in the community games, up until her debut match as scrum half for Munster this year, Muirne’s story is testament to the fact that determination will take you a long way in the sporting world.

Speaking on the topic of gender equality in sport, Ms Wall said: “This year our Munster inter pros were shown on TV for the first time ever on TG4. This was a big step for women’s sport and it was great to see women’s sport being televised. I think it is improving all the time with more people attending women’s sporting events, a lot of young girls joining sports and more media around women’s sport, but it still has a long, long way to go.”

Proof of this came to the forefront this weekend when Muirne’s team, Kerry Rugby, were scheduled to play a Munster Cup match against Dolphin in Cork on Sunday October 17 at 1pm.

“We were really looking forward to the game and that morning at 8:45am we found out the game was cancelled because the referee couldn’t make it. Some girls have a long way to travel and were getting ready to leave. It was not good enough. This would never happen for a men’s game. It is frustrating and it can sometimes lead to women quitting as they give up work or other commitments to be available for matches just for them to be called off last minute.” Ms Wall said.

This is the not the first time this has happened to women’s rugby teams, Ms Wall recalled that for their past two matches, no referee has showed up and they were left to organise another referee to fill in last minute. In one case they had to resort to getting their coaches to take turns to referee one half of the match each.

These first-hand accounts highlight the huge issue that is inequality in women’s sports in Ireland, an issue that affects clubs across the country.

Over a month ago, videos circulated of the Connaught women’s rugby team, who were forced to undress in unsuitable conditions outside Energia Park, after their Interprovincial Championship game.

The video, that gained traction across social media, caused shock and outrage amongst the public, citing it unacceptable and humiliating conditions for the young women.

Although Muirne’s similar experience did not gain the same media coverage, it beggars’ belief towards how many of these incidents are occurring on the daily that we are unaware of.

“It is not good enough. A lot of improvements still need to be made to ensure gender equality in sport.”