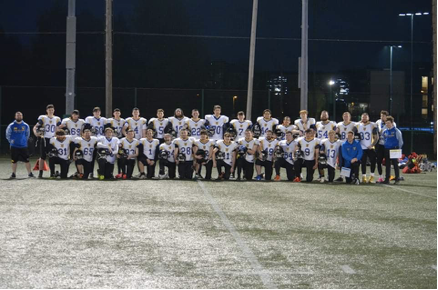 As far as niche sports go in Ireland, it seldom gets anymore niche than the sports of the American variety.

With a week to go before the collegiate season begins in Ireland, many have been waiting with bated breath after a two year wait for American football to grace Ireland’s sports fields once more.

Limerick’s own UL Vikings have been hard at work since September, looking to hit the ground running after such a long hiatus. We asked Vikings’ quarterback Eoin Rudkins how the team have been preparing for the upcoming season and the experience of being an American Football player in Ireland.

Much of Vikings’ current players have come to the sport naturally through other team sports leading to an interesting roster makeup of players involved in other teams around UL.

“There isn’t a culture of youth American Football in Ireland, so we all have played soccer, GAA or rugby before.”

While American Football has never been particularly renowned for its inclusivity, as far as its application in Ireland it seems there is a place for everyone on the football field. Regardless of shape, size, stature, or sporting experience it seems that the sport is open to all who have an active interest.

“The amazing thing about the sport is a lot of guys come and play because there is a position on our team for anyone no matter how big or small. It’s a very inclusive sport in that way”.

Regarding season prep, Vikings are well and truly prepared for a successful season. They have been training twice a week and partook in a preseason varsities’ tournament with the American football teams in UCD and Trinity. With the Covid-19 pandemic, this weekend will see a majority of the team experiencing competitive American football for the first time.

“We have missed out on two years of members, so a lot of new guys are going to get a lot of game time”

Going into this season, Rudkins has made clear that confidence is key and with a seemingly well drilled and young team it is no surprise as to why.

“We’re very confident that we will have a good season. We have a very talented and young team”

The UL Vikings kick off their season on March 13th, facing Wexford Eagles at home in Maguires’ Field.